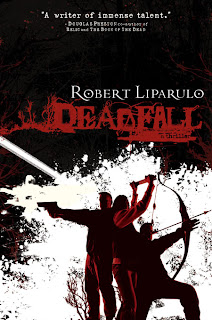 He brought us Comes a Horseman & Germ, and now this November he's bringing us Deadfall. Sounds like a real page-turner.

Four Friends Get Away to the Canadian Wilderness… Only To Find Themselves Targets in a Deadly Game.

It started as the perfect vacation. Dropped by helicopter in the middle of nowhere. Hunting. Fishing. Stories by the fire. The nearest town far away.

But not far enough.

Tiny Fiddler Falls has been taken over by outsiders bent on turning it into a real-life video game, where “game over” means you’re dead. At their disposal is a prototype of the world’s most advanced weapon, known as “Slacker” — a Satellite Laser Cannon. From its 280-mile-high perch, the device can pinpoint a human target and instantly vaporize it. The person is there… then he’s not.

Campers and killers collide in a high-stakes battle of weapons and wits. But how does one fight an impossibly high-tech enemy with only primitive bows and arrows and the cover of the woods?

An intimately intense novel of character forged in the midst of search, survival and sacrifice.

Read our interview with Robert Liparulo here.
Read our review of Germ here.