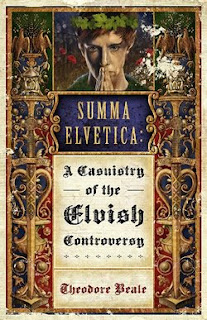 Jeff Gerke has unveiled the second book in his three-book launch list over at Marcher Lord Press. It's called Summa Elvetica by Theodore Beale.

Summary of the novel:

In Summa Elvetica Beale brings us a delightfully speculative what-if scenario: what if the Catholic Church (or something very like it) existed in a fantasy world in which dwelt non-human intelligent races like orcs, trolls, and elves?

At some point in such a world the leading ecclesiastics would have to wrestle with the question of whether or not these demi-humans have souls and therefore ought to be the subject of evangelization by the Church.

Summa Elvetica is the story of the young priest whom the Church assigns to investigate the matter. Along the way toward his conclusion, he falls in love with an Elven princess and finds himself in the middle of a racially motivated war.

More than the curiosities of high clerics hang in the balance as he comes to declare what he discovers to be God's will about whether or not elves have souls.

He works primarily in the computer game industry, where he has launched and guided a small business into a successful career. He is an entrepreneur and a musician, and, if you do a little digging, you'll find he's interesting in other ways, too.

Posted by TitleTrakk.com at 7:19 AM