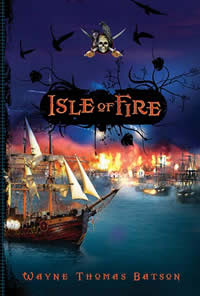 Thomas Nelson is pleased to announce that Isle of Fire, a familiar face on the CBA bestseller list, is the proud recipient of the 2008 Moonbeam Award Silver Medal for Young Adult Fiction. For an award that recognizes not only the creators of exemplary children’s books but also authors who support literacy and life-long reading, there could not be a better choice.

Having witnessed firsthand the lack of quality reading material for young minds, Batson set out to develop his own teaching tools through the creation of his first published series, The Door Within; and now with his second series, Isle of Swords and Isle of Fire. Batson involved his students in the writing process, welcoming critique of his work.

In this new series, Batson weaves a spell-binding adventure filled with high-seas drama where battles rage, storms brew, a long-dormant volcano awakens, and a sea creature slithers in the deep as pirates race for a cliff-top fortress. It is a story of amazing courage that will take young readers on the ride of their lives as well as encourage and challenge them to be heroes themselves.

The bestselling Isle of Swords adventure continues in Isle of Fire as ancient mariners rise from legend and cut an all-too-real swath of destruction across the Atlantic. The newly formed Wolf Fleet scours the Caribbean, hunting the pirates they once called comrades. And in the pitiless winds of a monstrous hurricane, whole fleets will be blasted apart and devoured.

Wayne Thomas Batson is the author of the bestselling The Door Within Trilogy. A middle school reading teacher in Maryland for 17 years, Batson tailors his stories to meet the needs of the young people he cares so deeply about. Batson writes adventures set in imaginative locales because he believes that on a deep level, we all dream of doing something that matters and that we all long for another world. When last seen, Batson was tromping around Westfarthing with his beautiful wife and four adventurous children.

About the Moonbeam Awards
Presented by Jenkins Group and Independent Publisher Online, the Moonbeam Children’s Book Awards are designed to bring increased recognition to exemplary children’s books and their creators, and to support childhood literacy and life-long reading. Awards are given in 30 categories covering the full range of subjects, styles and age groups that children’s books are written and published in today. For more information, visit www.moonbeamawards.com.

Read our review of Isle of Fire here.
Posted by TitleTrakk.com at 7:35 AM