This just in from Jeff Gerke, publisher at Marcher Lord Press:

Marcher Lord Press has been kidnapped. Alas, it's true. Strange beings from outer space have apprehended MLP leadership while the authorities slept.

The fiends knew exactly how to hurt us. First, they disabled our defenses. Knocked the silly cat right out. Then they overhwelmed our proximity alarms with vastly advanced weaponry that MLP scientists are only now beginning to study. Finally, they attacked MLP leadership in the first wave. Without command instructions from the top, the loyal MLP defenders were paralyzed. It was classic shock and awe.

The morning after the attack dawned on a Marcher Lord Press materially different from what had been. Witnesses emerged from the rubble of their homes to behold three otherworldly vehicles cooling on the landscape.

The first was a futuristic-looking craft that appeared to be constructed half of terrestrial composites and half of strange metallic alloys. From this vehicle popped a superhuman warrior who told a tale of cyborgs, massacres, and autonomous battle tanks. In his world, a miracle anti-aging elixer has been developed--but something terrible has gone wrong, and the powers that be will do anything to keep the populace from finding out. 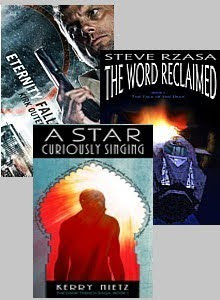 This cybernetically augmented human told us that his name was Kirk Outerbridge and that his ship was called The Miracle Cure. Though apparently ship names in his galaxy are subject to change.

No sooner had Outerbridge concluded his tale than a bald cyberpunk exited the second vehicle and began to speak. This vessel was even more advanced than the first. It was seemingly capable of deep-space--perhaps even interstellar--flight. The bald man spun a yarn of a future Earth in which Islam has conquered all, and privately owned debuggers, like him, must do the work that keeps this Imam-ordered civilization running smoothly.

Unfortunately, one of the bots has malfunctioned. On this ship's maiden voyage to a star curiously singing (which is, he said, also the name of his vessel), something happened to the main servbot on the crew. It seemed to go crazy and tear itself apart limb from limb. Our man has been called in to find out what happend. The debugger, who calls himself Kerry Nietz, says his tale is something akin to I, Robot meets Muhammed--in space.

The third vessel is the most advanced of the three. It sits confidentaly atop monstrous landing struts, towering over the battlefield. A young man leaps from an open portal and lands on the ruined street. He carries an odd white box at his hip. His ship is capable of many leaps between stars and has seen galaxies the other two could not begin to guess at.

In his world, the Act of Religious Tolerance has outlawed all but the state religion, and the holy books from all belief systems are banned. The galaxy is held in uneasy alliance and all the colonized worlds are at peace--or so goes the official story. The truth is that the secret military is about to stage a coup, a powerful warrior family is about to be shredded, and the forbidden item in the young man's white box can tear the empire apart. Or save it.

Our youth offers his name, Steve Rzasa, and utters an enigmatic whisper: The Word Reclaimed.

Whether or not these three vessels of war and their mysterious captains mean us further harm is yet to be determined. Possibly they pose no further danger and the destruction they wrought was merely the result of their interdimensional rifting into our dimension. Perhaps their stories are something we must and shall hear.

All we can say with any assurance is that the future--that future beginning October 2009--has been claimed by men from the future and their tales of wonder, woe, and awe.

Read our interview with Jeff.
Posted by TitleTrakk.com at 9:57 AM