Valley of Bones by Eric Wilson 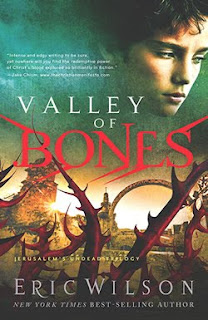 Coming in April 2010 is Eric Wilson's final book in the Jerusalem's Undead series.

In the final installment of the Jerusalem's Undead Trilogy, readers will witness an epic showdown of a battle between good and evil that started when Judas was hung.

The suicide of Judas Iscariot in 30 A.D. left his blood seeping into the soil of the Field of Blood, in Aramaic: the Akeldama. When this same field is disturbed by work crews outside Jerusalem in 1989, a clan of supernatural Collectors is released from the ancient burial chambers. Infused with Judas's enmity, they seek to corrupt and destroy by using blood to infect and exploit a host's weaknesses.

Gina Lazarescu's life has been on a collision course with the Akeldama Collectors. Everyone she knows and loves is threatened by their ever-increasing efforts. Gina knows she can't defeat them on her own, though, and that it will take the combined efforts of all Those Who Resist for this living evil to be stopped.

Posted by TitleTrakk.com at 9:10 AM