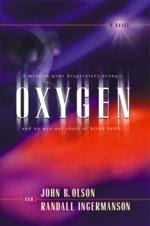 Both are professional science fiction, and are well known for this pair of books about a manned mission to Mars -- especially since Oxygen netted a Christy Award.

"Randy is a brilliant online marketer," says MLP Publisher and founder Jeff Gerke. His "snowflake method" software for creating plots for novels along with his Fiction 101 and Fiction 201 e-courses have been very successful. You can check him out at AdvancedFictionWriting.com.

John's other works include Fossil Hunter, and Shade, the latter of which is a Christian vampire novel. The continuation of Shade, called Powers, was released last year. Jeff says that John is an excellent programmer and, "For the last several years he has run a continuing role-playing game out of his house for the neighborhood kids."

I've read both of these books and they are great. Serious page-turners and lots of fun (in a thriilling sort of way).

My question is "When is Randy going to write another novel?" It's been waaaaayyyyy too long since the last one. Maybe Marcher Lord Press can sign him to a contract and force him (in a loving way without the use of torture) to write his next book.

Agree with anonymous. Love Randy's books. His City of God series was beyond words - felt like I was living in the time. He definitely needs to write again although I appreciate the instructions he gives to other. Excited about this new edition to Marcher Lord Press.