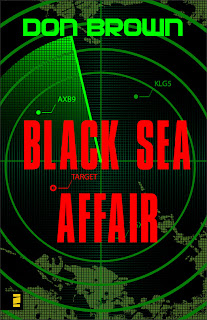 Don Brown's next installment (Book #4) in his Naval Justice series is coming in February of 2008. Black Sea Affair continues in the Brown tradition of action/suspense...

Navy Commander Pete Miranda is chosen to lead a top-secret military operation to sneak a U.S. submarine into the Black Sea. His mission: to sink a rogue Russian freighter carrying stolen nuclear fuel. The attack brings the world to the verge of nuclear holocaust. The Black Sea Affair is one of the most dangerous games of brinkmanship since the Cuban Missile Crisis.

As the U.S. Navy searches for weapons-grade plutonium that has been smuggled out of Russia by terrorists, a submarine mishap escalates the international crisis. JAG Officer Zack Brewer is called on to defend American submarine skipper Miranda and his crew at a military tribunal in Moscow. It is a heart-stopping race against the clock.

With Russian missiles activated and programmed for American cities, Brewer stalls for time, as the U.S. Navy frantically searches the high seas for a floating hydrogen bomb that could threaten New York Harbor.

Author Don Brown takes you from the Oval Office to the Straits of Istanbul to the high-stakes court-martial in Russia in one of the most dangerous games of non-stop suspense.

Read our review of Book #3, Defiance here.
Posted by TitleTrakk.com at 9:45 AM