The Warriors by Mark Andrew Olsen 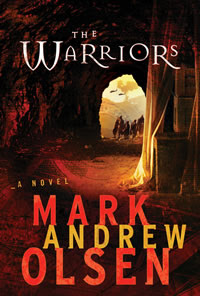 Coming this spring, Mark Andrew Olsen brings us the sequel to his successful novel The Watchers. Titled The Warriors, it continues the saga begun in The Watchers featuring characters Abby Sherman & Dylan Hatfield.

Young Abby Sherman has been summoned to Israel, where a Watcher, the Sentinel of Jerusalem, lies dying. In her last breaths, the woman tells Abby of an ancient document prophesying humanity's full-scale entry into the ongoing conflict between the armies of heaven and fallen angels.

Dylan Hatfield has strayed from the teachings he learned in The Watchers. Returned to an earthly army, he leads a secret force to reconnoiter the Afghani tunnel complex from which Osama bin Laden escaped in 2001.

Abby's spiritual gifts alert her to Dylan's peril, and when she issues an Internet prayer warning on his behalf, she unwillingly sets in motion a series of events which will lead to one of America's hottest off-the-books secrets.

Read our interview with Mark Andrew Olsen here.
Read an excerpt of The Watchers here.
Posted by TitleTrakk.com at 7:24 AM