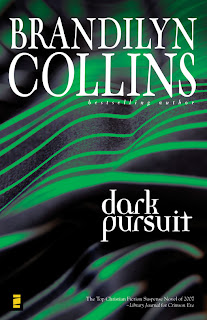 Novelist Darell Brooke lived for his title as King of Suspense—until an auto accident left him unable to concentrate. Two years later, recluse and bitter, he wants one thing: to plot a new novel and regain his reputation.

Kaitlan Sering, his twenty-two-year-old granddaughter, once lived for drugs. After she stole from Darell, he cut her off. Now she is rebuilding her life.

In Kaitlan’s town two women have been murdered. She is about to discover the third. The only possible culprit? Her boyfriend, Craig, son of the town’s police chief.

Desperate, Kaitlan flees to her estranged grandfather. For over forty years, Darell Brooke has lived suspense. Surely he’ll devise a plan to trap the cunning Craig.

But can Darell’s muddled mind do it? And—if he tries—with what motivation? For Kaitlan’s plight may be the stunning answer to the illusive plot he seeks …

Read our review of Amber Morn here.
Posted by TitleTrakk.com at 10:03 AM

This is the question plaguing me after reading Brandilyn Collin's latest suspense novel, Dark Pursuit.

When a best selling novelist (King of Suspense) gets up there in years, compounded by an accident that leaves him unable to complete a book, he wants to recapture his fame and respect. But how to do that when he can't plot any longer? Enter his estranged granddaughter who's gotten herself mixed up in a rash of ugly murders. Her predicament could hold the key to his plot problems when she runs to him for help. But she has a few secrets and pains she's not sharing just yet.

In Dark Pursuit, Brandilyn Collins weaves together a story of racing-against-the-clock suspense, but really probes the inner workings of the most difficult ties of humanity--family relations. The pacing of the story definitely fits in with Brandilyn's "seatbelt suspense" trademark, yet the emotional layers work to pose readers to question their own family relations, as well as reflecting upon their own decisions of actions. For the reader who's looking for more than just a thrilling story, I'd highly recommend Dark Pursuit. This is a book that will linger in your mind long after you flip the last page.