Angel of Wrath by Bill Myers 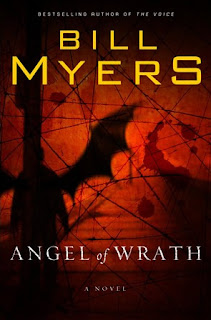 Coming in April from Faithwords is the sequel to Myers' popular novel The Voice.

Thirteen-year-old Jazmin, her ex-Special Ops uncle Charlie, and former FBI agent Lisa are reunited in the second of the Voice of God series to stop a an assassin driven to murder members of a megachurch led by Lisa's brother. This assassin has drawn in a coven of teens toying with satanic practices to support his efforts. The naive youth engage in ceremonies that appear to usher in the death of each of his victims. When their rituals open a portal into the spiritual realm, a terrifying and mysterious entity crosses over to our world.

The battle culminates with the capture of Lisa's father as the next target and a Black Mass requiring both their deaths as a sacrifice. The team will, once again, have to rely on all their wits, strength, and faith to survive in this action-packed, unearthly warfare.

Read our interview with Bill.
Read our review of The Voice.
Posted by TitleTrakk.com at 8:03 AM