The Night Watchman by Mark Mynheir 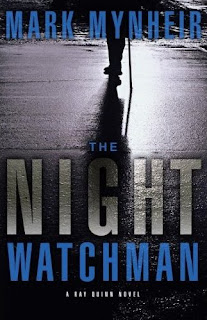 Coming in May 2009 from Multnomah is Mark Mynheir's The Night Watchman.

Eleven months ago, Ray Quinn was a tough, quick-witted Orlando homicide detective at the top of his game–until a barrage of bullets ended his career…and his partner’s life.

Now medically retired with a painful handicap, Ray battles the haunting guilt for his partner’s death. Numbing the pain with alcohol and attitude, Ray takes a job as a night watchman at a swanky Orlando condo.

But when a pastor and an exotic dancer are found dead in one of the condos in an apparent murder-suicide, Ray can no longer linger in the shadows. The pastor’s sister is convinced her brother was framed and begs Ray to take on an impossible case–to challenge the evidence and clear her brother’s name.

Ray reluctantly pulls the threads of this supposedly dead-end case only to unravel a murder investigation so deep that it threatens to turn the Orlando political landscape upside down and transform old friends into new enemies. As Ray chases down leads and interrogates suspects, someone is watching his every move, someone determined to keep him from ever finding out the truth–at any cost.

Read our review of The Void.
Posted by TitleTrakk.com at 11:29 AM

I have just installed iStripper, so I can have the hottest virtual strippers on my taskbar.