TitleTrakk co-founder's novel to be published by Tyndale! 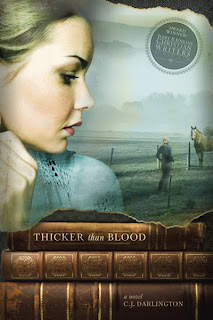 TitleTrakk.com's very own C.J. Darlington will have her first novel, Thicker Than Blood, published by Tyndale House in late 2009 or early 2010 (official release date not yet confirmed).

The novel is the winner of the 2008 Operation First Novel contest sponsored by the Jerry B. Jenkins Christian Writers Guild and Tyndale House publishers.

This is a novel C.J. started when she was fifteen-years-old. She was about to give up on it but decided to try submitting the novel to this contest.

Find out more of her story to publication by visiting C.J.'s blog. 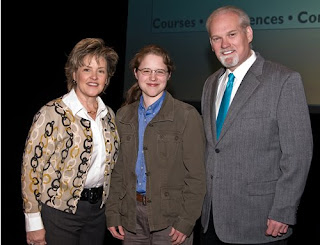 
Working Summary of Thicker Than Blood:

Two sisters, estranged for 15 years. Their blood ties weren't enough. Only something stronger could bring them together again.

Christy Williams finally has her life on track. Her career as an antiquarian book buyer at the renowned used bookstore Dawson's Barn of Books is taking off. Hunter Dawson is teaching her the fine points of purchasing collectible books, and so far she's been able to keep her drinking problem from interfering. But when she discovers her ex-boyfriend, who also works at Dawsons, is stealing valuable books right off the store's shelves, she's unable to stop him for fear he'll expose the skeleton's in her closet.

Things begin to unravel when a stolen Hemingway first edition is found in her possession, framing her for a crime she didn't commit. With no one to turn to, she yearns for her estranged family, especially her younger sister May, who she abandoned in their childhood after their parents' untimely deaths. Now the owner of a failing cattle ranch, May couldn't possibly want a relationship with her, the big sister who didn't even say goodbye all those years ago. Could she?

Soon Christy's fleeing from her shattered dreams, her ex-boyfriend, and God. Could the Triple Cross ranch be the safe haven she's searching for, or will May's new-found faith give her sister even more reason to reject Christy? Will they realize before it's too late that each possesses what the other desperately needs?

Writing for the Soul photos by Cindi of Selah Studios
Posted by TitleTrakk.com at 4:20 PM