The Pawn by Steven James 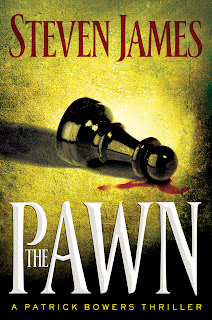 An interesting new series is coming in September from Revell. The Pawn is Book #1 in the Bower Files by Steven James.

Special Agent Patrick Bowers had only met one man who made him truly afraid. Until now. When he's called to North Carolina to consult on the case of an area serial killer, he finds himself in a deadly game.

Cunning and lethal, the killer is always one step ahead of the law, and he's about to strike again. It will take all of Bowers's instincts and training to stop this man who calls himself the Illusionist. And just when the pieces start to come together, Bowers realizes they're not quite adding up. Can he unravel the pattern and save the next victim? Or will the Illusionist win the game by taking one of his opponent's pieces? Thrilling, chilling, and impossible to put down, The Pawn will hold suspense lovers in its iron grip until the very last page.

Watch the trailer for the book below:

Posted by TitleTrakk.com at 6:57 AM