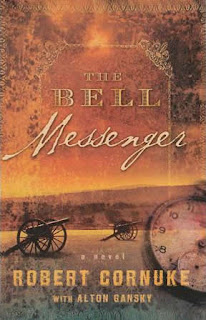 A suspenseful yet touching story of a Civil war Bible that pops up again and again over a century and shapes the very history of the nation.

This rich and involving historical and archeological thriller begins as a Union soldier, Tate, shoots a Confederate preacher known as the Bell Messenger and is bequeathed a worn Bible by the dying man. Tate's historical narrative parallels the contemporary story of John Brandon, who has just graduated college in 2000 and received the very same Bible, unearthed in a Saudi Arabian cave, as a gift.

The potent history of this book is revealed as Brandon searches for its previous owners, along the way uncovering the existence of a mysterious cache of gold hidden during Old Testament times -- which brings shadowy figures hot on Brandon's heels, hungry for the gold and desperate to learn the new clues he possesses.

As the past and present intertwine, the reader learns that this Bible has passed through many hands over the years. From the Civil War to the building of the Central Pacific Railroad, to the gang wars and the holding of Chinese slaves in nineteenth-century California, to the trenches of World War I, Brandon learns of the lives this Bible has saved, the deaths it has caused, and the history it has changed forever.

Posted by TitleTrakk.com at 7:17 AM