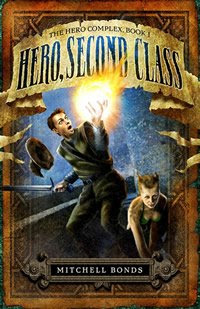 Jeff Gerke has unveiled the first book in his three-book launch list over at Marcher Lord Press. It's called Hero, Second Class and is written by a 20-year-old author named Mitchell Bonds.

Hero, Second Class is a delightful roast of all the fantasy fiction elements we hold dear. It is said that only someone who loves something can truly lampoon it. So it is in this case. Bonds' novel is a riot.

Quest with Cyrus, our your protagonist who aspires to be a Hero. But Heroes have a guild, you see, and lots of rules. One has to pay one's dues, apprentice to a Hero in good standing, and comport oneself as befits a member of the Heroes Guild.

Cyrus is fortunate to be serving his apprenticeship during a True Crisis, during which an Arch Villain is on the loose. An ambitious hero-in-training could make quite a name for himself during such times.

complicated by a wise-cracking dragon, a self-narrating knight, a droll zombie, and an attractive young woman who also happens to kind of be a cat.

On top of it all, Cyrus is discovering he has strange, non-standard-issue magical powers that definitely don't fit into his plans. And the Arch Villain (along with sundry Villains Guild members) has suddenly taken an intense personal interest in our plucky young protagonist.

Read an interview with Mitchell here.
Read a sample chapter from Hero, Second Class here.
Posted by TitleTrakk.com at 6:15 AM