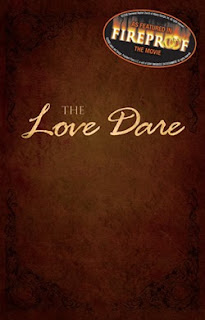 Weeks before the movie Fireproof opens in theaters, The Love Dare, a book that began as a plot device in the film, has sold 300,000 copies into bookstores and is in its third printing.

“It’s a plot device, it’s a book, it’s a marriage saver, it’s a movement,” says John Thompson, vice president of marketing for the book’s publisher, B&H Publishing Group. “This is the fastest-selling book we’ve ever handled.”

“In America, the average book sells about 5,000 copies,” Thompson said. “The Love Dare, at $14.99 a copy in paperback, could be the top-selling Christian book of 2008.” The paperback version hits stores in time for the movie’s theatrical premiere this month. The keepsake edition coincides with the DVD release in spring 2009.

The Fireproof plot turns on a handwritten book, a 40-day challenge to learn and practice unconditional love. In movie pre-screenings, audiences left asking, “How can I get that book?” “We shut out the world and wrote for several weeks,” said Stephen Kendrick who, with his brother Alex had also written the movie. “We weren’t expecting such demand so early. Meanwhile, it’s a scary thing to realize the love God calls us to, and the love He’s ready to give through us. Our wives are watching to see if writing the book has taught us anything!”

Both brothers are associate pastors at Sherwood Church in Albany GA, which produced the movie.

Sony Pictures opens Fireproof in some 750 theaters this Sept. 26. In the movie, firefighter Caleb Holt receives a handwritten book from his father, a 40-day challenge to love his wife after

they’ve agreed to divorce. Caleb resents loving in the face of indifference but goes through the motions to respect his father: Day One: Love is Patient; Day Two: Love is Kind; Day Three: Love is Thoughtful. While Caleb learns to bite his tongue, set out coffee, and realign his priorities, his wife, Catherine, completely ignores each gesture. By day 20 he breaks; he can’t do it. That’s when the real love story begins.

This powerful story of a spouse transformed as he read The Love Dare is making people want that 40-day challenge for themselves. Churches want it for their marriage classes, and marriage and family counselors want it for couples. In time for the movie’s release, churches, groups, and classes are ordering by the bulk to extend the conversation the movie starts.

The Love Dare and Fireproof come from the creators of Facing the Giants, the 2006 movie that surprised the film industry by showing in 1,010 theaters and earning $10.1 million at the box office using an all-volunteer cast from Sherwood Baptist Church where the Kendricks are associate pastors. To date, the Facing the Giants DVD has sold 1.5 million copies in 14 languages in 58 countries (on every continent!). Fireproof and Facing the Giants are marketed and distributed by Provident Films and Sony Pictures.

Read our interview with Stephen Kendrick here.
Posted by TitleTrakk.com at 9:23 AM