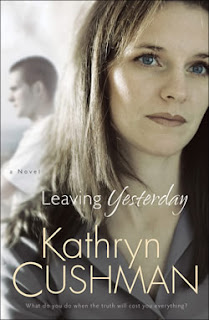 Coming in October 2009 from Bethany House is Leaving Tomorrow by Kathryn Cushman.

A Powerful Drama of a Mother's Unfailing Love

Alisa Stewart feels like she's lost two sons: her eldest to a terrible tragedy and her youngest, Kurt, to a life ruined by addiction. But now Kurt has checked himself into rehab and found a healing faith that seems real. It's like he's been raised from the dead. But then a detective arrives at Alisa's door asking questions about a murder--the death of a drug dealer before Kurt entered rehab. Alisa fears losing her son again, and when she finds evidence linking him to the killing, she destroys it. Her boy is different now. He's changed and deserves a second chance. But when another man is charged with the crime, Alisa finds herself facing an impossible choice: be silent and keep her son or give up everything for the truth.

Read our interview with Kathryn.
Read our review of A Promise to Remember.
Posted by TitleTrakk.com at 9:58 AM