Jerry B. Jenkins & Stephen King on cover of Writer's Digest 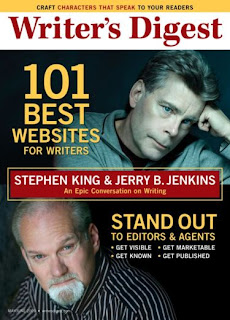 Says Jerry at his blog:

Several years ago my assistant buzzed me and said, “Stephen King on the line for you.”

I have any number of friends who would pull such a prank, but I fought the urge to say, “John Grisham here.”

It turned out that it was really him. We happened to have the same audio reader (a brilliant voice actor named Frank Muller) who performed our books on tape and disc. Frank was about my age but had married late and had kids the age of my grandkids. In the fall of 2001 he’d had a horrible motorcycle accident and was left severely brain damaged. I showed up on Stephen King’s radar because we were both trying to help out.

...During the conversation I said, “It may surprise you to know that I’m a reader of yours.” I told Stephen that while I wasn’t into horror fiction, I had read many of his short stories and that The Green Mile was one of my favorite novels.

He said, “It may surprise you to know that I’m a reader of yours.”

Surprised doesn’t begin to describe it. Frank had given him copies of some of the Left Behind series.

=====
The May/June issue of Writer's Digest magazine features Jerry and Stephen in a candid interview/conversation where they talk about their writing (including each of them commenting on the other's work), their processes, and much more. Be sure to pick up a copy!