Robin Shope novel to be a movie! 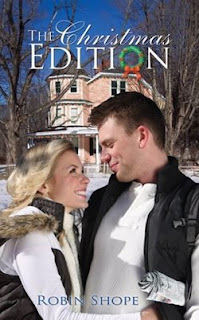 Author Robin Shope and Salty Earth Pictures have recently announced Shope's novel The Christmas Edition is to be a feature film.

Wisconsin newspaper The Daily Union online has run a piece which says in part:

Salty Earth Pictures has announced that it will begin filming a new feature movie later this year, with Fort Atkinson serving as the on-screen setting.

The non-profit film company based in Fort Atkinson specializes in producing Biblically-based entertainment, including such shows as the family-friendly comedy series "Fifth Pew From the Front" and the puppet-populated "Movie Critters" and its follow-up 30-minute series.

Company founder Steve Zambo announced the feature film will be based on the novel, "The Christmas Edition," which was written by Robin Shope. Shope, an author now living in Dallas, Texas, has written a series of novels that are set in Wisconsin, known as The Turtle Creek Edition series.

...Without revealing too much of the story, "The Christmas Edition" movie will be based on a struggling family-owned business in a small Wisconsin town. It focuses on relationships, secrets, trust, faith and the hope that Christmas and its message provide.

"The Christmas Edition is one of her series of books, like The Valentine Edition and The Easter Edition," Zambo explained. "They all take place in Wisconsin."

Zambo recalled how one day, he received an invitation via Facebook to do the movie adaptation.

"I had known she was an author because a mutual friend had written some other books with her," Zambo said. "So I joined, and she said 'take a look at my books.' I did, and right about then we had made the decision to make some more features, like our project 'Scrooge's Next Christmas.' But that is a bigger budget movie, and we needed a bridge picture, like the movie 'Facing the Giants,' which was filmed by a small group in Georgia."

So Shope sent Zambo the books, read by his daughter.

"She knew we needed to do a picture that we could do within a reasonable budget, and my daughter said, 'Here Dad, read this.'

And Zambo decided to adapt The Christmas Edition for the screen.

Read our interview with Robin.
Read our review of The Christmas Edition.
Posted by TitleTrakk.com at 8:58 AM