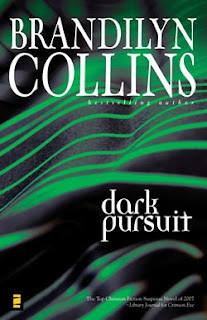 This just in from Brandilyn Collins' blog:

I'm pleased to announce that a contract has been signed for the movie option of Dark Pursuit, my stand-alone novel released in the fall of 2008.

Maggie Field of Maggie Field Literary Consulting discovered Dark Pursuit while searching for new novels with film potential. She alerted producer Harry Gittes, who liked the book very much. Gittes has teamed up with screenwriter Chuck Pogue to purchase the option.

Before the contract was negotiated, Gittes and Pogue spent about an hour on the phone with me and my agent, Lee Hough of Alive Communications, talking about their vision for the film. It was a good conversation, and I appreciated the time they took to fill me in on their thoughts. After that conversation, all parties decided to proceed with negotiations.

If you're unfamiliar with the term "movie option," think of it as a rental of film rights for a book. For the specified time of the option, the purchasers tie up the film rights while they create a screenplay and see if they can gain interest in funding the film. If they do, the film rights are then bought outright. If not, when the option runs out the rights revert to the author, who can then option or sell the film rights to someone else.