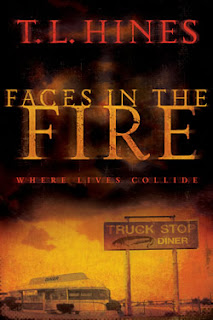 (Billings, Mont.) [PRWEB] Novelist TL Hines and publisher Thomas Nelson announces a new social media project to support the release of Hines's latest novel, FACES IN THE FIRE. The project, dubbed "Be a Face in the Fire," invites fans to submit images to become part of an online mosaic at http://www.tlhines.com. Every person who submits an image during the first week— July 27-August 2—will receive a free digital download of the novel which can be read on the user’s personal computer or digital reader device. Images submitted after the first week will still be eligible to win unique action figures given away at the end of the summer.

“Part of the fun of a new book for me," Hines says, "is finding interesting new ways to interact with readers. I've been a big fan of social media since launching my fiction career. So with a book named FACES IN THE FIRE, I thought, why not create a giant mosaic and invite people to submit their own faces?" Hines thinks the game prizes will convince social media fanatics to put their faces in the fire. "The free download, courtesy of my publisher, Thomas Nelson, is a great giveaway for social media users; these are the people who are reading books on Kindles and iPhones. Plus, 20 people will win the unique action figures."

Five photos judged most interesting or unique will win, and in a special category, the five most interesting tattoo photos. "One of the main stories in the book is about a tattoo artist, so I'm especially interested in photos of tattoos," Hines says. Five winners will also be drawn at random from all photos submitted, as well as five winners from people who share the project through Facebook, Twitter, Delicious or other social media services.

Hines's new novel is a collection of four interconnected novellas, with the lives of the main characters crossing paths as they face strange circumstances. Ghosts trapped in the clothing of the dead. Miraculous cancer cures appearing in spam emails. Tattoos that come to life, revealing scenes of the future. And a mafia hit man whose touch can literally kill. Such quirky stories and characters have earned Hines comparisons to authors such as Dean Koontz—and readers who are surprised to find out Hines is published by Christian publisher Thomas Nelson. "Are my books Christian books?" Hines asks. "Sure; I think my worldview comes across. But Christian books aren’t all alike, and that's okay. There's room on the shelves for traditional genres such as Christian romance, Christian thrillers, Christian historical novels—and strange stuff like mine. It shows the Christian book market is growing and expanding, and that's good for all of us."

"Be a Face in the Fire" isn't Hines's first out-of-the-box effort to connect with fiction readers. Last year, he disassembled one complete copy of his novel THE UNSEEN and more than a hundred volunteers hid pages to be discovered in locations across the U.S. and Canada. To launch his first book in 2005, he invited people to sign up as Volunteer Book Publicists, and shared 10% of his first royalty statement with the 100 most active participants. For his second book, readers completing an online puzzle received a song written and recorded for the book by the band Pivitplex. Hines also names a character in each book after readers who sign up on his web site or Facebook fan page.

Such unique marketing tactics have earned coverage in trade publications such as Publishers Weekly and several online media outlets. "I do it because I'm trying to sell a few books, of course," he says. "But more than that, I do it because it's fun—I get to meet new people, discover new things. And that's what social media is all about."

ABOUT TL HINES
TL Hines writes "Noir Bizarre" stories, mixing mysteries with oddities in books such as WAKING LAZURUS, THE DEAD WHISPER ON, THE UNSEEN, and FACES IN THE FIRE. His work has won recognitions ranging from the Maryland Writers Association novel contest to Library Journal's "25 Best Genre Fiction Books of the Year" award.
Facebook: tlhines.com/facebook
Twitter: twitter.com/TLHines
Photomosaic: www.tlhines.com/fitf
Press materials for "Be a Face in the Fire": tlhines.com/faces

Read our review of Faces in the Fire.
Posted by TitleTrakk.com at 10:43 AM