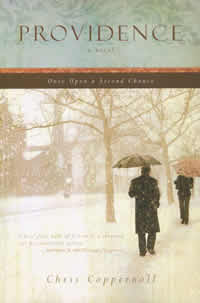 Author, speaker, and radio host Chris Coppernoll appears on the cover of the January 2008 issue of LifeWay's "Christian Single" magazine, as his debut novel, Providence: Once Upon a Second Chance, from David C. Cook, goes into its second printing. Providence tells the story of a single, college pastor who pens a national bestseller that overturns his life during the Christmas season. The book has received exceptionally positive responses from reviewers and readers alike.

"The emails from readers have been amazing," says Coppernoll. "Both singles and married alike have connected with Providence and its story of forgiveness and the renewal of lost love. The story in ‘Christian Single’ talks about God's grace and His wonderful plans. Being single myself, I hope readers are inspired by it."

Coppernoll recently signed a new contract with David C. Cook for two new novels to be released in 2008 and 2009. Following the August publication of his debut novel, Coppernoll established the ““Providence Cares”” initiative to help raise money for families of children with catastrophic illnesses. Speaking and signing books at “Providence Cares” events, all proceeds go directly to benefit a family’’s health care expenses.

In addition to his work with “Providence Cares,” Coppernoll continues to make appearances around the country in support of Providence. He has appeared on Faith Café, The Harvest Show (LeSea Broadcasting), USA Radio Network, Moody Radio, WJIE, Deeper Life, WQME, Bridges, and has been featured or reviewed in HomeLife Magazine, CCM, and on numerous websites. He's been a guest speaker on college campuses, including Penn State in Altoona, Pennsylvania; Anderson University in Anderson, Indiana; and Taylor University in Ft. Wayne, Indiana, addressing audiences on Providence's themes of singleness, as well as creative writing and Christian broadcasting. Additionally, Coppernoll has appeared at book signings at Sam's Club and LifeWay Christian Stores, and at conferences like ICRS and the Global Missions Health Conference at Southeast Christian Church in Louisville, Kentucky.

Coppernoll is the author of three nonfiction titles: God’s Calling: Searching for Your Purpose in Life; Secrets of a Faith Well Lived; and Soul2Soul. He is also the founder and host of the internationally syndicated Christian music radio program “Soul2Soul" and has conducted hundreds of interviews on faith issues with personalities such as Max Lucado, Amy Grant, Michael W. Smith, and Sheila Walsh. He also serves as a deacon at The People's Church of Franklin, Tennessee, and is currently working toward a Masters in Ministry Leadership degree through Rockbridge Seminary.

Learn more or buy Providence at Christianbook.com
Posted by TitleTrakk.com at 8:57 AM

I love this book!