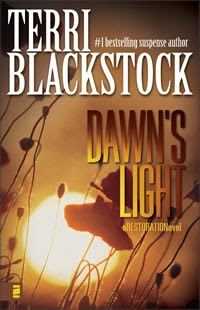 The 4th and final installment of the Restoration series from Terri Blackstock (Zondervan) will hit shelves in May of 2008.

As the Pulses that caused the outage are finally coming to an end, thirteen-year-old Beth Branning witnesses a murder. Threatened by the killer, she keeps the matter to herself. But her silence could cost her life.

Meanwhile, as Deni’s ex-fiancé returns to Crockett with a newfound faith and the influence to get things done, Deni is torn between the man who can fulfill all her dreams and Mark Green, the man who inhabits them.

As the world slowly emerges from the crisis, the Brannings face their toughest crisis yet. Will God require more of them than they’ve already given? How will they keep their faith if he doesn’t answer their prayers?
Posted by TitleTrakk.com at 11:21 AM