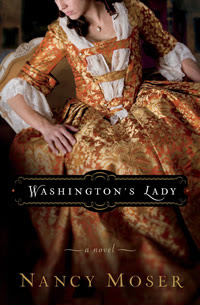 Coming May 2008 from Bethany House:

It has been said that without George Washington, there would be no United States. But without Martha, there would be no George Washington. He called her "my other self." Who was this woman who captured the heart of our country's founder? Martha Dandridge Custis was a wealthy, attractive widow and the mother of two small children when she was courted by, then married to the French and Indian War hero. Her new life as Martha Washington took her through blissful times at Mount Vernon, family tragedies, six years of her husband's absence during the Revolutionary War, and her position as a reluctant First Lady.

Known for moving first-person portrayals of Nannerl Mozart and Jane Austen, Nancy Moser now brings to life the loves, tragedies, and accomplishments of Washington's Lady, the mother of the United States.
Posted by TitleTrakk.com at 2:36 PM