I'd like to personally invite you to come to the Isle of Swords Release Party. This should be a very exciting evening. I'll be there doing dramatic readings from Isle of Swords, as well as, a special sneak peek at something else coming in the not to distant future.

Thomas Nelson Publishers will even be flying my publicist in to help with the event. Secretly, I think they want to know just what I do at these things. ;-) There may also be local press.

That said, the bigger the turnout, the better. I'd like to see that Barnes & Nobles store absolutely swamped with folks...and pirates. I'll be dressed in full pirate garb, including my new cutlass from RealArmorofGod.com. See below: 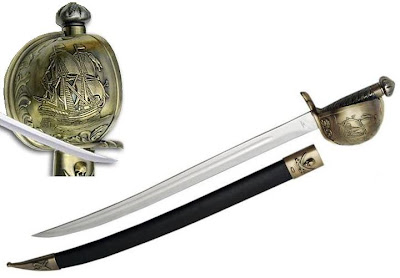 Come if you can. I'd love to see you there!

Wayne Thomas Batson
Posted by TitleTrakk.com at 8:19 AM