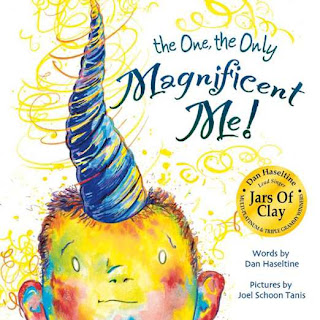 (TRAVERSE CITY, MI) September 12, 2007 — Just one week after its release, Dan Haseltine’s The One, The Only, Magnificent Me is rocketing up the charts of the book world, debuting as the #1 children’s book on the Spring Arbor Bestseller List, and #9 for all Christian titles. Spring Arbor is the largest wholesaler of Christian books in the country. Outside of the Christian market, the book is already #2 for illustrated children’s books and #47 for all books on the Top 100 Bestseller List at Ingram Book Group, the largest book wholesaler in the United States.
The One, The Only, Magnificent Me is written by Dan Haseltine, lead singer for multi-GRAMMY, multi-platinum band Jars of Clay and is illustrated by Joel Schoon Tanis, award-winning artist and Emmy-winning host of the children’s television show, Come On Over!
Magnificent Me has already been called “Part Dr. Seuss, part Shel Silverstein” and has been getting glowing reviews from all over the country. Amy Sondova, editor of YMX & YMX:ALL ACCESS raved, “Haseltine’s skills as a songwriter may only be paralleled by his skills as a children’s author.” Other admirers have enthusiastically declared that the book “is at the top of my list for children’s books” and that “the illustrations are perfect, crescendoing with the brilliant rhyme and meter of the story.”
Haseltine, who acknowledged that the story was autobiographical, was thrilled at the immediate reception for Magnificent Me. “Joel and I worked very hard on it, putting so much energy and emotion into the book. The stores have been incredible and the teachers, parents, and children have been so supportive—it’s wonderful that they feel so strongly about it. It is very humbling to be compared to such iconic authors—they are heroes of mine.”
Tanis was equally thrilled. “I’m excited to go on tour starting next week and talk with the stores and share this story with them. The book is beautiful and I am so proud and happy that it can be making an impact on people’s lives—it is incredibly fulfilling.”
In addition to Haseltine’s touring throughout the country with Jars of Clay, Tanis is on a national television tour, painting live and doing finished paintings for charity.
The One, The Only, Magnificent Me is available at all Target stores nationwide, as well as Borders, Barnes & Noble, and Christian and independent bookstores around the country. Please visit www.mackinacislandpress.com for further details.
Posted by TitleTrakk.com at 7:30 AM

Labels: Dan Haseltine, Jars of Clay, The One the Only the Magnificent Me