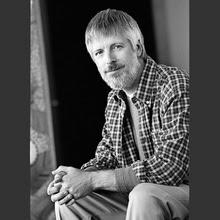 Frank recently posted on his blog about his recent struggle with Meniere's disease, his future writing plans, and more. We're excerpting it in part here:

...The past two years have seen some major changes in my life and priorities, some with a bit of foot dragging, and some willingly enough, but in any case, ordained by the will of God.

One of the biggest change-makers in my life in the last two years has been my struggle with Meniere’s disease, a weird ailment of the inner ear, in my case, my right ear. It has to do with an imbalance in the fluid pressure in the cochlea and the semicircular canals which affects both hearing and balance. The classic four symptoms are: loss of hearing, particularly the lower frequencies; tinnitus, or NOISE (in my case, a loud shriek on top of a Kubota tractor parked right outside my ear and running at about 5000 rpm); a sensation of pressure (you constantly feel like your ear needs to pop), and loss of balance or, in severe cases, vertigo, a terrible, nauseating sensation of spinning.

Let me start off by praising the Lord for his healing touch upon my ear. My recovery has been extremely slow, stretched out in tiny, barely discernible increments over the past 18 months, but proceeding steadily onward, for which I am very grateful. For the first year or so, I had trouble walking; my ear was so sensitive to noise that I had to wear hearing protection to ride in a car; I could not go to church or any public gathering where people would be talking in noisy groups; I couldn't sit in noisy restaurants; I could not listen to music, I could not sing, speak publicly, or play an instrument; I had to watch movies at home with the sound turned down – not all the way, just way down - and the subtitles turned on. As many of you know, I really enjoy playing the banjo and I used to be part of a five piece progressive bluegrass band called Northern Cross. We had to disband because I couldn't bear the sound of my own instrument or my own voice - yeah, go ahead, make your wisecracks. I walked into that one. Ahem. You through now?

...I gave up flying - I didn't want to be denied my medical certificate so I didn't bother trying to renew it. I sold the airplane. I quit traveling and public speaking because I couldn’t speak up clearly without it hurting my ear and I couldn’t stand to be around groups of people.

I had to quit playing in the worship band at our church because the music hurt my ear and the noise in my ear – that ol’ Kubota tractor - and the weird, double-noting - every musical note I heard was doubled with a note totally out of key – made it impossible to hear what I and my fellow musicians were playing. I spent the better part of a year sitting in the very back of the church with an ear plug AND noise cancellation headphones just so I could be there at all.

NOW … all things in perspective. There are folks out there, some of them friends, who have had to deal with Ménière's disease and had a much tougher time of it. Some have had such terrible vertigo that they've had to have the balance nerves from that ear cut; one guy has no sense of balance left at all and has to get around in a wheelchair or with crutches. I have been blessed, I have been spared the worst of this disease. Most of the noise is gone, the sensitivity has gone down enough for me to enjoy church with just an earplug for that one ear; I'm even playing in the worship band again with my own little noise canceling monitor system. My balance is okay – at least, I can shrug and tell myself, Well, I never was that steady a walker anyway.

...The dream to become a film director is still alive. Sure, I’ve had to double check and test it on occasion, but it’s still there. I've continued to study and prepare, and I think I’m about ready to give it a shot. There is a local film company that has offered me a chance to write and direct a low-budget picture, and I think that would be a prudent thing to do. It'll be a chance to work with a film crew and a competent production company from start to finish in the role of writer and director with minimal risk and - even if I do say so myself – great potential benefit. I can put in my time, pay my dues, get some experience and build a track record, and if that little project does well, then perhaps the Lord will open the door to direct another project, possibly something based on one of my books -- Monster, for instance. So, I’m working on an original script right now and hope to have it well on its way to completion by the end of the year, so we’ll see where that goes. Lord willing, I may be able to direct some of my other works including The Oath and This Present Darkness. I understand Twentieth-Century Fox’s ownership of This Present Darkness reverts back to me and Crossway Books in just a few years, so YIPPEE! I figure by the time either of those stories is ready to be made into a film, I’ll be ready to direct it.

And while that is all processing in the mill, I would love to do another novel, most likely a third Darkness book. I know my good publisher friends are eager to see another novel, and that is, after all, what I mainly do, so I’ve narrowed my focus down to these two avenues: the novel, the movie. If these two are all I have to think about, I just might get one of them done … and then the other one, God willing....

Posted by TitleTrakk.com at 9:18 AM

You are my inspiration, Frank. I love you humility, wit, and talent. Thank you for being so candid with your readers; you inspire hope when times get tough. Blessings!

I mean your humility. Smart phones...gotta love em. Oh one more thing...I've read all of your books!! They're the best.