House of Wolves by Matt Bronleewe 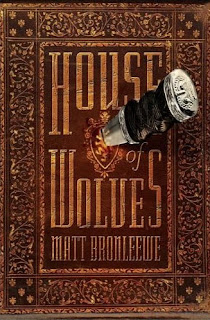 Coming in August from Thomas Nelson, is House of Wolves by Matt Bronleewe. This novel is the follow-up to his successful Illuminated and features some of the same characters.

We snagged this summary of the novel for your reading pleasure:

Rare-books dealer August Adams is enmeshed in the mystery surrounding another book-this time The Gospels of Henry the Lion.

In 1983, a mysterious book reappeared. The book was The Gospels of Henry the Lion. Created in 1188, the book was a chronicle of Henry's aspirations to become the most powerful ruler in the world. But the book was only a part of the mystery. Henry was also the originator of the legendary Guelph Treasure-a collection of history's most significant religious relics. Legend said that The Gospels of Henry the Lion held the key to finding them.

Now it's up to August, April, and Charlie to find out if the legend is true. Not that they don't have problems of their own. April has a meddlesome boyfriend. Charlie has a schoolyard bully on his back. And August's long-estranged father has suddenly decided to enter his life again. What they discover about the treasure-and themselves-will change their lives forever.

Read our interview with Matt here.
Read our review of Illuminated here.
Posted by TitleTrakk.com at 9:39 AM