Beyond the Reflection's Edge by Bryan Davis 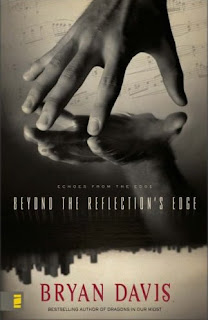 Coming in May 2008 from Zondervan is Bryan Davis' first novel outside of his Dragons in our Midst and Oracles of Fire series. Sounds like an intriguing one!

Sixteen-year-old Nathan Shepherd has a great life traveling where the careers of his father, an investigator, and mother, a renowned violinist, take him … until his parents are found murdered. Left with only a mirror and notes from his father’s last case, Nathan goes into hiding at the remote country home of Tony, his father’s college buddy, and Tony’s teenage daughter, Kelly. The mysterious mirror must be a clue to what happened to his parents, and when images appear in it—people and things that don’t exist—Nathan and Kelly painstakingly gather evidence. But the killers want the mirror too, and danger threatens the teens at every turn. As it becomes evident that Nathan’s father had stumbled upon dark forces at work in the world, several questions arise. Could it be that the mirror is a portal to a parallel world? Could this technology be used for evil purposes? And could his parents still be alive, trapped in another dimension? Nathan and Kelly struggle to solve the mystery before they too become victims. This chilling, hair-raising adventure is jam-packed with action in a fantastical world where nothing is as it seems, and even mirrors tell lies.
Posted by TitleTrakk.com at 8:32 AM

Labels: Beyond the Reflection's Edge, Bryan Davis, YA fiction

Beyond the Reflection's Edge is a literary roller coaster that never slowed down. I loved every minute of it. I don't think I will be able to find a book of this caliber anywhere else among the genre. Bryan Davis did a masterful job and I will be eagerly awaiting the sequel.

Beyond the Reflection Edge is yet another masterful work that keeps you on the 'edge' of your seat the entire time you are reading it. (Though that won't be long since you will have a hard time putting it down...) Bravo, Mr. Davis I will be waiting for the next book in the series with high expectations that I don't think will be disappointed.

This is a great book and is a must buy for any Fantasy lover. I read it nearly none stop for hours on end because of its great plot and story-line. I am a fan of Mr. Davis' other books and had high expectations and was not disappointed at all.

Mr. Davis has really done it this time. He has weaved a tale full of action, adventure, grief, and true friendship, maybe even surpassing Dragons in our Midst. This is one book you won’t want to put down.

I had the great privilege of pre-reading this book. I am not allowed to spoil the surprise, so I will only say that after being enthralled by the world Bryan Davis created in Dragons in Our Midst and expanded upon in Oracles of Fire, I eagerly anticipated his new series, Echoes from the Edge. The characters, like those in his first two series, are realistic, relatable teens that readers of all ages can identify with. I see echoes of myself in Daryl, who constently alludes to and quotes from such favorite fantasies as Lord of the Rings and Narnia, as well as The Wizard of Oz.
My good intentions to read only a chapter of Beyond the Reflection's Edge daily evaporated. I read the whole book in less than four hours. The first chapter contained more emotion and action than some books ever reach. From there, the story builds in depth and action to an extraordinary conclusion. Unlike some books, Beyond the Reflection's Edge yields more excitement with each re-reading. I can't wait for the next installment!

Beyond the Refection’s Edge is an incredible tale of fantasy and adventure filled with action, suspense, humor, and the power of love. I loved the captivating way the author blends in music with the story and the mirrors and different dimensions were enchanting. The vivid characters kept me rooting for more and I felt as I was in the story beside Nathan, Kelly, and his parents. It kept me on the edge of my seat until I turned the last page. This is one book that you will not want to miss! I can’t wait to see what other mysteries Bryan Davis has in store during the rest of the series. I recommend it to all teens.

Bryan Davis has done it again in his new action-packed thriller Beyond the Reflection's Edge. Composing a novel of faith, hope, and love, Mr. Davis has created a complex story worth reading and re-reading. This book kept me entranced, you won't be able to put it down!

In most books the first few chapters are just leading up to the story and it takes a while before you get into the book. That's NOT how it is with Beyond the Reflection's Edge!
The book kicks off in the very first chapter with more action than some books ever get into and gets even better from there. Once you start reading it you won't be able to stop! Whether you find reading fun or not you will definitely enjoy this book. I was up all night reading it!