Shade by John B. Olson 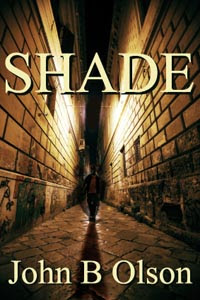 Coming in September 2008 from B&H publishing is John B. Olsen's Shade. This book has been described as John's vampireless vampire novel!

Graduate student Hailey Maniates is injured as she tries to escape a waking nightmare. The doctors diagnose her as having paranoid schizophrenia and urge her to forget about the hallucinations, but she can’t rest. Too many unsolved mysteries surround the attacks. First and most perplexing is the giant homeless man who rescued her. He seemed convinced that some kind of Gypsy vampire is pursuing both of them. Is he suffering from the same condition she has?

Against all reason, Hailey finds herself becoming more and more attracted to this strange young man. But can she trust her feelings? What if they’re part of her delusion? What if the vampire is real after all? What if the homeless man is the vampire?

will there be a book II. PLEEEASE!!

We hear there IS going to be a second book! :)