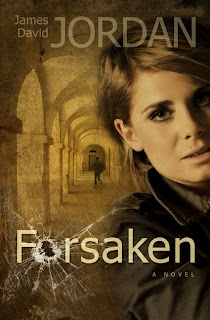 An intriguing looking novel coming from B&H this October (what a great cover) by James David Jordan (Something That Lasts).

When Simon Mason, the world’s best-known televangelist, receives threats from Muslim terrorists, he hires Taylor Pasbury, a beautiful former Secret Service agent, to take charge of his security. Taylor is thrilled to receive the high-profile assignment, but she has no idea that Simon already knows more about her than she could imagine.

When the terrorists strike, making a demand of the pastor that would shake the most steadfast saint, Taylor draws on all of her hard-knock toughness and training as she fights to save Simon and his daughter. Along the way, she discovers that she is not the only one who has done things she would like to forget—and she is not the only one who understands that some things are more important than living.

The book focuses on a spiritual dilemma that we parents can only hope we will never face: What if we had to choose between God and our own children? Forsaken is an unusual kind of love story wrapped in an action thriller. It is the first of a two-book series revolving around Taylor Pasbury, a beautiful but troubled former Secret Service agent hired by the world's most famous televangelist after he receives terrorist threats. The second book in the series will be published in the fall 2009.
Posted by TitleTrakk.com at 9:38 AM