Vote for the Ending of The Justice Game by Randy Singer 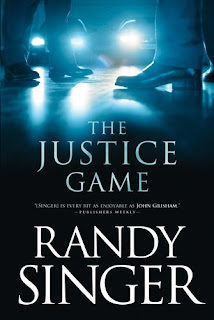 Coming in July 2009 from Tyndale House is Randy Singer's next legal thriller. "This one's personal," he says at his website. In fact, there's a whole factual story around this one. Says Randy in full at his website:

This one is personal.

On December 15, 1988, a sixteen-year-old student named Nicholas Elliot took a Mac-11 assault weapon to Atlantic Shores Christian School and opened fire. He shot and killed a teacher named Karen Farley, wounded an assistant principal, and burst into a trailer where a Bible class was meeting. When he opened fire on the students who had scrambled to the back corner of the trailer, frantically praying, the gun jammed. The Bible teacher, Hutch Matteson, tackled Elliot and prevented the kind of tragedy that hit Columbine High School in Colorado several years later.

Atlantic Shores was the school where my wife taught. The school my kids attended (though they were not there that day). When I learned that Elliot had purchased the gun illegally from a gun store in Isle of Wight County (through a transaction referred to as a "straw purchase transaction"), I ended up representing the family of Karen Farley in an unprecedented lawsuit against that gun store. The verdict shocked everyone.

That was fifteen years ago -- my baptism by fire into the national gun debate.

With this book, I wade back in ...wiser (I hope), more cautious, and with a better understanding of both sides. My goal here is not to make converts (at least, not in the Second Amendment sense), but to fairly present both perspectives and let the reader decide. I've tried to create compelling characters who are gun enthusiasts and others who advocate gun control. In fact, I was so determined to be balanced that I did something I've never done before and, as far as I know, no other novelist has done before or since.

My readers determined the verdict for this book.

I put together an on-line video, showing a news report about the fictional case at the heart of this book and portions of the closing arguments of both lawyers. I asked readers to watch the video and render a verdict. The verdict in this story reflects the verdict of a majority of my readers.

Whether it does or not, thanks for taking this journey with me. In a very real sense, you are always the jury. And, just like in my real trials, I've got a few butterflies as I submit my case to you.

For The Justice Game, the jury is out.


Read our interview with Randy Singer.
Read our review of By Reason of Insanity.
Posted by TitleTrakk.com at 6:00 AM

Thanks for posting my author's note. This weekend, we'll be filming the short courtroom video that will allow readers to vote on the verdict that will be incorporated into this book. I'll be sure to send you a link to the video when we post it in January.