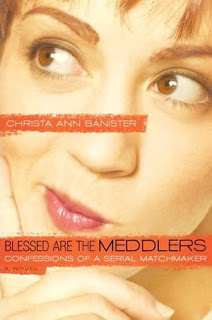 It is a New Year and everyone is buzzing about their 2009 resolutions. Charming chick-lit author Christa Ann Banister lends a hand to those wishing to spice up their dating life or for those who enjoy a good giggle from Sydney Alexander, a.k.a the heroine from Banister's hit books "Around the World in 80 Dates" and "Blessed Are The Meddlers."

As the syndicated columnist of "Lucy for the Lovelorn" travel journalist and relationship expert (apparently, tons of bad dates are useful for something, right?) Sydney Alexander has doled out her fair share of advice for the dating-challenged. And now that the New Year has finally arrived, Sydney's got some sage guidance for all the singletons brave enough to venture out into the wild, wacky world of dating.

Relinquish the Remote Control
Sure, snuggling up on the couch with a cozy blanket, a pint of Chunky Monkey and the entire seven seasons of "Gilmore Girls" on DVD is most girls' idea of a great night in. But even Loralei Gilmore knew she wasn't going to shamelessly flirt with Luke unless she stepped away from the T.V. and left the house.

So basically, if you're not landing as many dates as you'd like, go out from time to time! Whether it's the chic neighborhood coffee shop or the nearby Barnes & Noble, you never know who you might strike up a conversation with.

No, Your Life Isn't a Romantic Comedy!
Sometimes the thing that's getting between you and a successful love life is a grandiose set of unrealistic expectations. Yes, it's important not to settle when it comes to relationships, but having a mile-long checklist of qualities for your perfect guy/gal will lead to nothing but disappointment. After all, it's important to remember that McDreamy is actually the product of a crack team of writers.

Take a Chance
Yep, ABBA was definitely on to something with their catchy pop song by the same name. But it's equally good advice when it comes to relationships. Take it from me, saying yes to a dinner invitation--even if you're not exactly sure how it's going to pan out--is a good thing. And if it's a bad night out? Well, at least you're flexing the dating muscle, and you might have a funny story to boot.

Don't Obsess!
If you've gone out with a great new guy and wonder exactly when he'll call next, don't take the first step and get in touch. While it sounds a bit old-school, trust me, guys still like the chase. Plus, a girl playing it cool is definitely much more desirable, not to mention has a far more balanced perspective.

Pray Up
And the single most important piece of dating advice is: Pray, pray, pray! In the same way you'd seek God about your career, your finances and everything else, it's important to pray about your love life. And while God's timing doesn't always seem to align with what you're hoping for, those valuable lessons you'll learn in the meantime (sigh!) will make you all the more prepared for that future relationship.

About Christa Ann Banister:
After years of working as a respected music critic, movie critic, and freelance writer for various publications: CCM Magazine, Crosswalk.com, Christian Single, ChristianityToday.com, not to mention kickstarting the inaugural Christian music blog for MTV's Urge.com, Banister has inked two novels in the past year and hopes her stories will inspire countless twenty and thirty-somethings in their quest for snagging Mr. Right.

Since the release of her critically acclaimed debut in 2007, she's already sold more than 5,000 copies while continuing her day job as a full-time freelance writer. The debut novel also garnered the No.1 spot on Amazon.com's Single Women's lit category as well as being dubbed by reviewers as a "talented new voice in chick-lit." She's also taught writing classes in the Minneapolis/St. Paul area, spoke at Bethel University and was the keynote speaker for Evangel University's "Artist Series" in Springfield, Missouri. For more information on Christa Ann Banister, visit her official website at christabanister.com.

Read our interview with Christa!
Review of Blessed Are the Meddlers.
Posted by TitleTrakk.com at 8:40 AM