Riven by Jerry B. Jenkins to be a movie 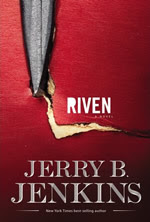 According to Dallas Jenkins, Jerry's son and the co-founder with him of Jenkins Entertainment, Jerry's novel Riven is to be a movie.

Says Dallas at his blog:

"We've also decided that Riven, the book my Dad wrote that came out last year (and for my money, is his best book), is going to be the second film in the Jenkins/Pureflix partnership. We will be talking to screenwriters in the next couple of weeks and hope to be in production by the end of the year. I'm actually going to send a letter to Joe Eszterhas, the famous screenwriter of Basic Instinct, Flashdance, Music Box, and Jagged Edge, among others, who recently became a Christian. I know it's a long shot, but I think he'd be interested in some of the films we're doing. His books

are incredible (any aspiring filmmaker should read The Devil's Guide to Hollywood), including his recent one, Crossbearer, which is about his conversion. Maybe Riven will strike a chord, or perhaps Youngest Hero, which is about baseball, one of his great loves. We'll see."

Read the rest of the blog here.

You GO Dallas!! This SO ROCKS!
PLEASE keep me in the loop!!!!