Valley of the Shadow by Tom Pawlik 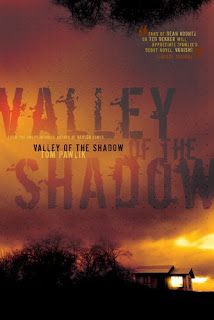 Tom Pawlik's debut novel Vanish has received great kudos (it won the 2006 Christian Writers Guild Operation First Novel contest). But he's not a one hit wonder. His sophomore novel, Valley of the Shadow, is coming in July 2009 from Tyndale House.

Conner Hayden is certain he survived his near-death experience for a reason.

He thinks it’s to save the life—and soul—of Mitch Kent. Mitch’s body remains on life support while his spirit is trapped with the old farmer Howard Bristol in the Interworld—a strange and dangerous dimension that Conner narrowly escaped during his brush with death in Pawlik’s award-winning debut novel, Vanish.
Meanwhile, in the Interworld, Mitch receives a warning from a mysterious stranger: Howard is not who he appears to be, and Mitch must flee immediately. Pursued by Howard and a terrifying, deadly creature, Mitch soon learns the truth about what happened to him and that his only hope of survival lies at the very edge of the Interworld.Tom also said this at his blog:

The sequel follows the stories of Conner, Mitch and Devon--oh and Howard too, while introducing a couple of new characters as well. I also developed more details around the basic scenario presented in VANISH and added in some new elements of the unknown to keep readers guessing.
Posted by TitleTrakk.com at 10:28 AM

I just finished reading Vanish - this would make a fantastic movie. I have now added Tom Pawlik to my list of favorite fiction authors. You scared me! I LOVE your imagination!!! Can't wait to read Valley of the Shadow. Please, keep writing! p.s... how do I find your music?