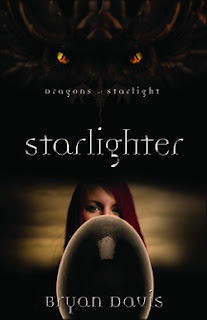 A new dragon series is coming from Zondervan in March 2010 from the author who brought us the Dragons In Our Midst and Oracles of Fire series. However, this series is not related to any of the author's other works.

Jason Masters has heard his older brother Adrian’s tales about dragons kidnapping humans. Supposedly, almost one hundred years ago, a dragon stole away several humans and enslaved them on its own planet. These Lost Ones, as Adrian called them, live terrible lives as cattle. Yet, the Underground Gateway, the portal to the dragon planet, still exists somewhere, and a secret society of the same name has long tried to find it so they can rescue the Lost Ones.

When Adrian leaves to find the portal, Jason takes his place as the Governor’s bodyguard. Although the government has tried to cover up the evidence, he learns that the legends are true, and after being accused of murder and learning that Adrian’s life is in danger, he has to conduct his own search for the portal, a journey filled with danger and intrigue.

Aided by a gifted young lady named Elyssa and an eccentric escapee from the dungeon named Tibalt, Jason ventures into the wilderness to locate Adrian and the Lost Ones. Yet, what he finds on the dragon planet proves to the biggest surprise of all. Koren, a lonely slave girl, is a powerful being called a Starlighter, the slaves' only hope for survival and rescue, though most refuse to believe that their ancestors ever came from another planet.
Posted by TitleTrakk.com at 9:09 AM