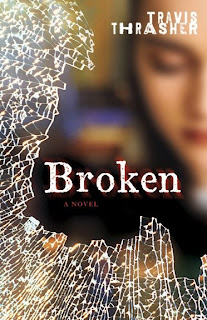 Coming May 2010 from Faithwords is Travis Thrasher's next novel Broken.

We've snagged a summary from Mr.Thrasher himself:

Laila had it all--love, family, wealth, and faith. But when her faith crumbles, her world falls apart and Laila finds herself living an empty, dangerous life as a call girl in Chicago.

When she is threatened, Laila shoots and kills a client in self-defense, sending herself into a spiral of guilt and emptiness. Six months later, she is trying to move on, but she's haunted by the past. She hasn't told anyone about the man she killed, and she's still estranged from her family.

When she is approached by a stranger who says he knows what she did, Laila has no choice but to run. But the stranger stays close behind, and Laila begins having visions of the man she killed. Little does she know she's being hounded by something not of this world, something that knows her deepest, darkest secret.

Scared and wandering, will Laila regain her trust in God to protect her from these demons? Or will her plea for salvation come too late?

The author of eleven works of fiction, TRAVIS THRASHER creates flawed characters and takes them on harrowing journeys of redemption. He and his wife, Sharon, live with their daughter in Chicago, IL. For more information about Travis, visit www.travisthrasher.com.
Posted by TitleTrakk.com at 12:07 PM