The Battle for Vast Dominion by George Bryan Polivka 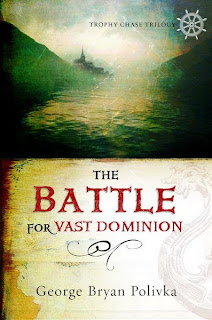 When The Legend of the Firefish, the first book in the Trophy Chase Trilogy was released in March of 2007, it immediately garnered great reviews and strong sales. Readers were then anxious for the second book in the trilogy, The Hand that Bears the Sword, released in July.

Now, in the eagerly awaited conclusion to the trilogy, author Bryan Polivka spins another compelling tale of pirates, monsters of the deep, and the battle between good and evil.

Packer Throme, determined to demonstrate that power comes only from above, leads his people in a war against the dreaded Drammune. The evil Hezzan of Drammun will kill without remorse for the secret of the Firefish...and so will dark forces lurking within Nearing Vast.

As army faces army, and navy faces navy, all are drawn inexorably to the source of the epic struggle... the feeding waters of the Firefish within the Achawuk Territory. One final surprise awaits Packer Throme there in the foreboding place where the struggle for the dominion of the world will be settled at last.

Read our review of The Legend of the Firefish here.
Posted by TitleTrakk.com at 9:05 AM