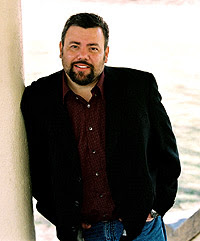 NASHVILLE, TENNESSEE – In a unique twist on the film option process, THOMAS NELSON has announced that their leading thriller author Robert Liparulo (COMES A HORSEMAN, GERM) is partnering with director Andrew Davis (THE GUARDIAN, THE FUGITIVE, HOLES) on a new thriller to be developed into both a movie and a novel. Mike Medavoy’s Phoenix Pictures (ZODIAC, STEALTH, THE SIXTH DAY) has optioned the movie rights for the yet-to-be-titled project, which Thomas Nelson will publish.

“Robert Liparulo and Andrew Davis is a match made in storytelling heaven,” says Liparulo’s publisher Allen Arnold. “Liparulo writes extraordinarily exciting suspense and action stories and few filmmakers have done better in that genre than Davis.”

Liparulo and Davis will co-write the screenplay, which Liparulo will solely pen into a novel. The plot centers on a military construction project in Illinois where evidence of the oldest known settlement in the Western Hemisphere is uncovered. Soon after, the lead archeologist makes an even more startling discovery: the remains of a recent murder victim. Fearing that an investigation will jeopardize the archeological treasures of the site, he and his team - accustomed to piecing together clues to solve mysteries - decide to investigate on their own. What they uncover is a conspiracy bigger than they could have ever possibly guessed, one that threatens thousands of lives and the U.S. government itself.

“Thomas Nelson is focused on entertainment driven properties,” Arnold continued. “This project is a natural given Liparulo’s acclaimed writing and the connection with top Hollywood talent who are committed to making this into a movie before it is even written.”

Read our interview with Robert Liparulo here.
Read our review of Germ here.
Posted by TitleTrakk.com at 7:31 AM