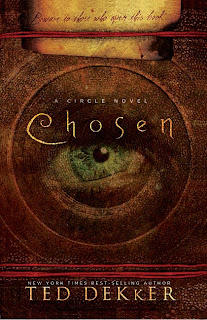 Ted Dekker's Chosen is set to release in January 2008, much to his fans' pleasure! Check out the photo of the cover at left, and here's a description:

It has been 13 years since Black, and the Forest Guard is slowly being defeated by the Horde. Thomas Hunter is forced to lower the recruiting age from 18 to 16 in order to find enough troops to train for his armies. Of those new recruits, four are chosen to become squad leaders--two boys and two girls--but first they must pass one of Thomas's tests and bring four cacti back to the group.

Nothing goes as expected on their quest, though. They are pursued by the Horde and Johnis, the youngest of the four, sees both Roush and Shatiki--both of which vanished 13 years ago. The Roush give Johnis a new mission: he, along with the other three recruits, must recover the six missing Books of History. Silvie is the only one willing to follow John's lead, though, and rescuing the other two from the trouble they bring upon themselves only delays the quest for the books. The books have the power to bring about unspeakable evil if they fall into the wrong hands.

Read our interview with Ted here.
Read a review of Skin here.
A review of Saint here.
And a review of Thr3e the movie here.
Posted by TitleTrakk.com at 1:34 PM