First look at "First the Dead" by Tim Downs 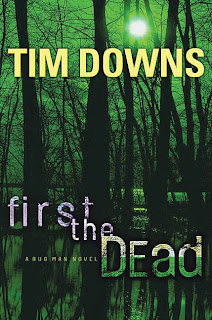 Tim Downs' next novel, First The Dead, is coming in January from Thomas Nelson. For fans of his previous "Bugman" novels Shoofly Pie and Chop Shop, you'll be pleased to know this novel marks the return of Nick Polchak (aka "The Bugman").

In the aftermath of Hurricane Katrina all government agencies were ordered to assist with efforts to rescue those who had survived. "First the Living" was the clear mandate given to everyone--including those who were there as part of the DMORT team and whose specialty was identifying and notifying the families of the deceased.

But there's a problem with that plan when forensic entomologist Nick Polchek realizes that some of the bodies he's seeing in the putrid waters flooding New Orleans were dead prior to the hurricane making landfall. Someone thought the hurricane would cover any evidence and literally allow them to get away with murder. But what are they trying to hide? And who could have been so certain that a hurricane of this magnitude would strike?

Someone is willing to do anything to keep these secrets hidden beneath the floodwaters. Nick must fight a desperate race against time and decomposing evidence--and the orders of his superiors--to raise the truth.

Tim also recently told us that his next book after "First The Dead" is also going to be a Bugman novel. Read the full interview here.