Coming in July from Karen Kingsbury, This Side of Heaven 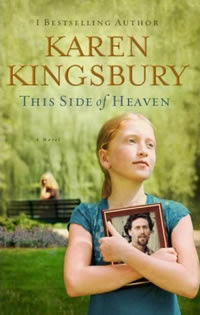 No one believed he had a daughter he’d never met . . . No one listened when she cried for the daddy she didn’t know . . . Now, in the ashes of tragedy, lies a vindication neither could’ve imagined.

Annie Warren never talked much about her oldest son, Brad. Years of failures and bad choices had created heartbreaking separation between mother and son. Then one dramatic night, a terrible tragedy reveals things about her grown boy that Annie never would’ve otherwise known. He was a good friend, an honest worker, and a hero. Most of all, Annie learns that Brad has an 8-year-old daughter, Savanah.

Meanwhile, in London, Fran Ito, is a single mother who lives on the streets, lost in a nightmare of drugs and illegal activity. She has no idea what to do with her daughter, Savanah, until she gets word of a financial settlement – one that might belong to her little girl. Spinning a web of deceit and desperation, Fran connives to get the money – one way or another.

A story of family secrets, broken relationships, and a love strong enough to span an ocean – this side of heaven.

Read our interview with Karen here.

Pre-Order This Side of Heaven at CBD.com

Posted by TitleTrakk.com at 6:44 AM

Labels: Karen Kingsbury, This Side of Heaven