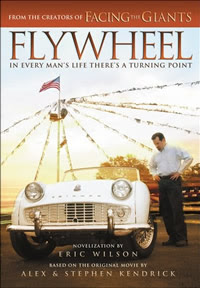 Novelist Eric Wilson has once again been tapped for the novelization of a Kendrick brothers film. His previous was Facing the Giants, but now he's working on Flywheel (Thomas Nelson, April 2008).

Jay Austin wants to sell cars in the worst way---and that's exactly how he conducts business at his dealership. His manipulative behavior spoils his relationships---even his family can't trust him. But as he restores a classic auto, he comes face-to-face with a startling reality---God's restoration! Will he take the road to redemption?
Posted by TitleTrakk.com at 10:29 AM