Jeff Gerke has recently announced the three novels he hopes to launch his fantasy/SF/speculative publishing house Marcher Lord Press. Negotiations are still underway with the authors, but here's a rundown on what we can look forward to soon in Jeff's words: 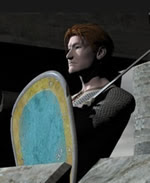 Whether it's fantasy you love, or science fiction, time travel, chillers, supernatural thrillers, alternate history, spiritual warfare, superhero, vampire, or technothriller—if it's speculative and it comes from the Christian worldview, Marcher Lord Press is your publisher.

Marcher Lord Press is a small, independent press that bypasses the traditional Christian publishing industry to get Christian speculative fiction directly into the hands of the fans who devour it.

Posted by TitleTrakk.com at 7:53 AM