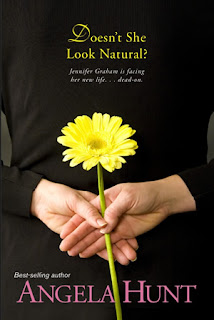 Says Angela over at her blog:

"My last release was Doesn't She Look Natural, a title that was hard to depict in a cover. (Woman-in-funeral home isn't exactly a common genre.) I liked the cover most of you have seen, which was green and youngish looking--trouble was, it seemed to identify the book as "chick-lit," which DSLN is decidedly NOT. 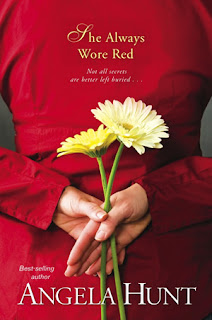 "So the creative brains at Tyndale House have come up with a new cover concept that I like a lot--and I think it's more true to the concept behind the Fairlawn books. Featured are the new cover concepts for Doesn't She Look Natural and She Always Wore Red, the next Fairlawn title."

Read out interview with Angela here.

Read our review of Doesn't She Look Natural? here.
Posted by TitleTrakk.com at 10:27 AM

I agree, these covers do much better justice to the story than the original one for DSLN. Good job Tyndale!

And I can't wait to read the next Fairlawn book. :-)