The Voice by Bill Myers 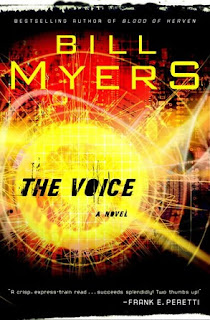 Coming in April from Faithwords is Bill Myers' next intriguing novel.

Charlie Madison is a burned out Special Forces Agent and his world is about to be turned upside down. When his 13-year-old niece barges into his reclusive life, Charlie must come out of retirement to rescue her parents and a computer Program that has recorded the actual Voice of God--the implications of which have shaken the world's religions to their core. Together, with the help of the attractive and mysterious Lisa Harmon, Charlie and his niece circle the globe, tracking down the religious radicals who have kidnapped his sister and brother-in-law. But, there is far more at stake than the safety of the parents or even religion. If the Voice of God created reality, It can destroy it. If controlled, It would become a weapon of mass destruction making all others obsolete. Soon the trio not only fights against various religious powers, but major governments as well . . . until the Program is discovered and played back with unimaginable results.
Posted by TitleTrakk.com at 8:17 AM